At Buckquoy on the coastal side of the road to the Point of Buckquoy carpark opposite the Brough of Birsay, excavations of a Norse buildings in 1976 revealed a number of human bones. A newborn baby was found under flagstone in a doorway, possibly a foundation ritual or wanting to have the child close by. Another reason could be that a doorway was a liminal space to the otherworld. Other neonatal bones were also found. There was also the burial of a middle-aged male accompanied by a spear, knife, whetstone, ring-headed pin, and a coin of the Anglo-Saxon king Edmund (940-6). The coin makes this mid-tenth-century burial one of the very latest accompanied burials known in Scotland. This burial was added to a mound which had formed over the ruined house. The site is on the current cliff edge overlooking the Brough of Birsay and Birsay Bay. A prominent, possibly pre-historic, mound, the Knowe of Buckquoy is close-by, as are the remains of over mounds. For maps see below, where Buckquoy is the green dot on the viewshed map.

A. Ritchie, 1976-7, ‘Excavations of Pictish and Viking-age farmsteds at Buckquoy, Orkney’, Proceedings of the Society of Antiquaries of Scotland 108: 174-227. 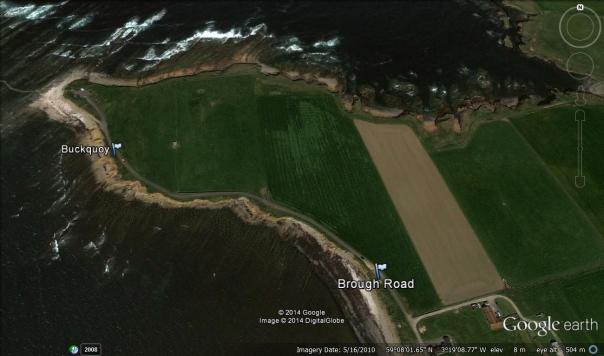 Along Brough Road, Birsay in the Red Craig area, only 300m south of the Buckquoy burials, a cist grave in a midden was found containing a male (50-60) buried with a knife and antler comb, the latter found in the mouth, although this may have been due to the considerable disturbance of the grave. Another burial of a female in her 50s was found with a knife. These burials are thought to date to the late 9th/early 10th century, so a generation or more earlier than the Buckquoy male. An unsexed Viking Age secondary burial (30-35) without grave-goods was found nearby, probably in a stone cist, on top of a Roman Iron Age/Pictish cairn. This site is very close to the Buckquoy settlement, which would have been visible. The site is also coastal and has the same excellent views of Birsay Bay and the Brough of Birsay, as is evident from the viewshed map, but the Knowe of Buckquoy is not as obvious. 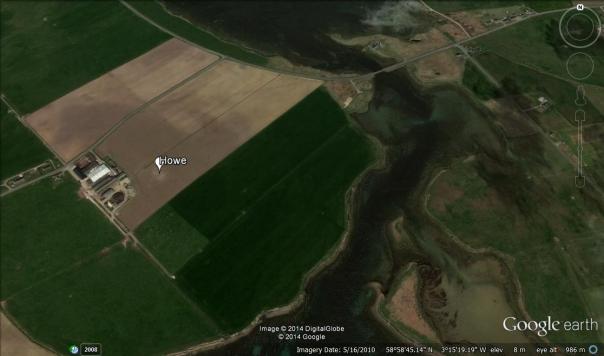 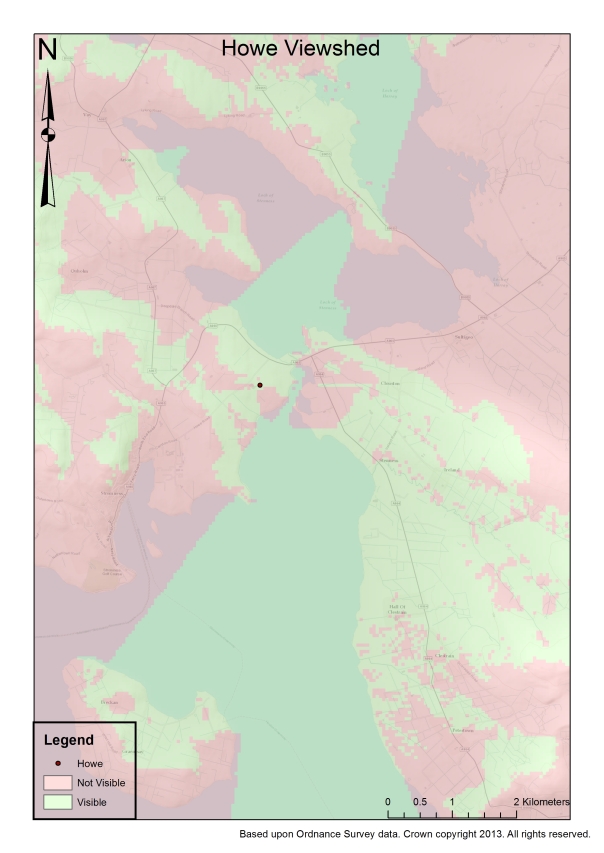 In the former broch mound at Howe, Stromness, a glass linen smoother was discovered in the 19th century, while the name ‘Howe’ comes from Old Norse haugr, meaning mound or burial mound. Complete excavation of the mound in the 1980s failed to discover any definitive evidence of a Scandinavian burial, but there was a concentration of bones in a 1.5 x 2m area on the outer broch tower wall, which would be a similar location to the burial at the Broch of Gurness (below). The excavator believes that this was a burial and the likely location of the linen smoother (Ballin Smith, personal communication).  The broch was once used as a navigation marker and was on the slope of a hill overlooking the Bay of Ireland and the Loch of Stenness. The viewshed map demonstrates how visible the broch from nearby waterways and coasts.

Various finds over the centuries suggest that the Broch of Gurness was re-used by Scandinavians as a cemetery, but only two certain burials have been found. In 1939 a stone lined grave in the wall of the defences at the outer entrance was found (73) which included a pair of oval brooches, sickle, knife, bone pin, and a necklace of amulets including a Thor’s hammer. Also found was an amber bead and a ringed pin in association with fragments of a skull in the ditch between the two defensive ramparts (74). As is demonstrated in the viewshed map, Rousay (but not the Westness cemetery site), Eynhallow, Eynhallow Sound, and coastal Mainland are all clearly visible from the broch. The viewshed map is based on burial point 73 but ultimately shows the visibility of the broch itself. The site is a few miles from the thing (assembly) site Tingwall, although there is no inter-visibility between them. 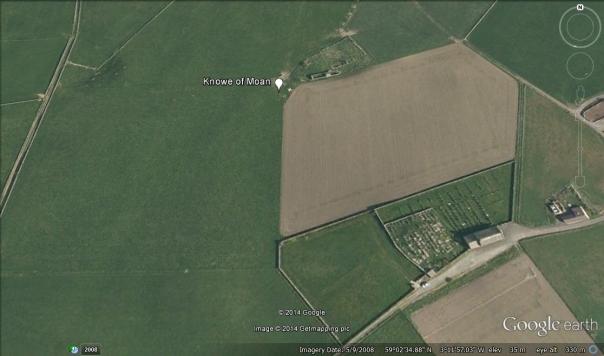 In 1886 in a field to the north of Harray Church and close to a now ruined farm house a probable cremation burial was found in a small stone cist under a hillock or mound. According to Christie it may have been a reused Bronze Age cairn. The burial included 64 glass, amber, and cornelian beads, and a cruciform brooch made from an Insular mount, in a field overlooking the Loch of Bosquoy and Loch of Harray. The cemetery of Harray Church includes a large man-made mound which is clearly visible from the burial. The earliest report of this probable burial is unusual in providing a quite specific find location, placing this burial in the ‘within 100m’ category.

J.W. Cursiter, 1887, ‘Notice of the bronze weapons of Orkney and Shetland, and of an Iron- Age deposit found in a cist at Moan, Harray’, Proceedings of the Society of Antiquaries of Scotland 21: 343-5.

Heather Christie, 2014, ‘The early medieval assemblage from the Knowe of Moan, Orkney’, poster presented at the Early Medieval Archaeology Student Symposium in Durham (available on academia.com). 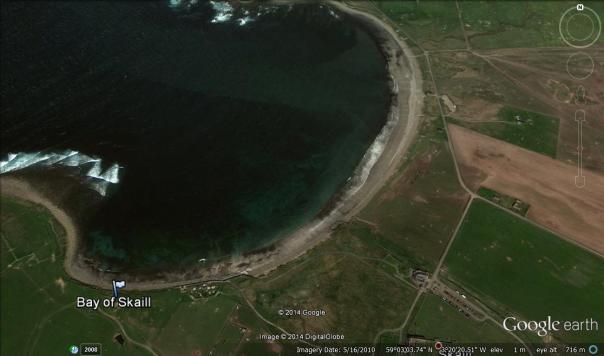 In 1888 a cist grave under a cairn was opened at the southern end of the Bay of Skaill, near a former boat-house visible on early OS maps. The burial included a spear, knife, whetstone, and a comb in case. The site is on high ground overlooking the Bay of Skaill. The burial is thought to have come from a multi-period settlement mound which is eroding onto the beach. Consequently, the burial may have been added to an existing ancient mound, the lower parts of which may be contemporary with nearby Skara Brae. The upper levels of the mound may have been Viking Age, but unfortunately excavation and therefore dating was not possible. The prehistoric village of Skara Brae is clearly visible – this was probably a large turfed mound in the Viking Age. There are also one or two certain Viking Age settlement mounds in the Bay of Skaill, although they are not particularly close to the burial site, being at the northern end of the bay. Assuming that the burial was from the mound, this burial is in the ‘within 100m’ category.