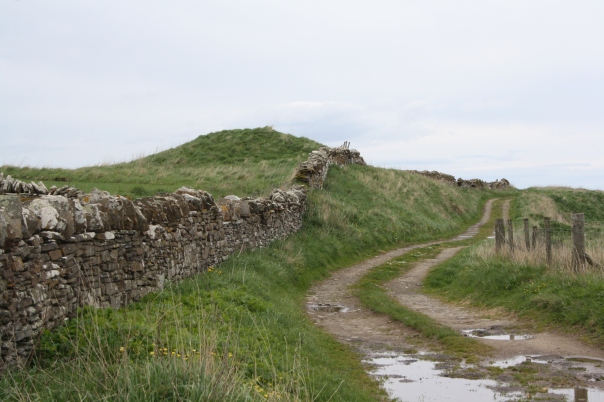 At the top of a possible broch mound below a flagstone a burial containing a pair of 10th century (P52) oval brooches and a Pictish arm-ring were discovered in 1786. The large mound is very obvious from the shore, even with a fence built across it and being somewhat truncated on that side. The shore in immediate vicinity is no good for beaching a boat, but you would pass the mound as you sail to the good beach at Dunnet Bay. The land behind the mound is flat so it would have also been easily visible when approached by land.

J. Anderson, 1874, ‘Notes on the Relics of the Viking Period of the Northmen in Scotland, Illustrated by Specimens in the Museum’, Proceedings of the Society of Antiquaries of Scotland  10: 549-51.

In 1991 the burial of a 12-13 year-old boy was discovered in the sand-dunes immediately above the high-water mark on the beach at Balnakeil. The boy is thought to have been buried in the mid-9th century and was accompanied by a sword in its scabbard, shield, throwing spear-head, iron knife, penannular brooch-pin, antler comb, needle cluster, Insular pendant capping, 14 bone gaming pieces, and other items. The weapons were adult-sized. The burial site has clear views of Balnakeil Bay and the mainland opposite.

Above the high water mark approximately 220m west of the former Huna Hotel a possible boat grave was discovered in 1935. Curle discovered a piece of skull, rivets, timber, and a chain fragment. Nothing is now visible at the site, and this tantalising burial belongs in the ‘within 100m’ category. Stroma, South Ronaldsay (Orkney), and Gills Bay are all visible from the site, which is above a suitable spot for beaching boats.

C.E. Batey, 1993, ‘The Viking and late Norse graves of Caithness and Sutherland’, in C.E. Batey, J. Jesch & C.D. Morris, The Viking Age in Caithness, Orkney and the North Atlantic Edinburgh: 152.

Two certain and one probable Scandinavian burial are known from the coastal village of Reay in Caithness, while unaccompanied burials and Pictish sculpture from the area suggest that the Scandinavians were buried in an existing cemetery. In 1912 a skeleton was found with the buckle of a horse bridle, followed in 1913 by the discovery of a pair of P51 oval brooches (one repaired), bronze buckle, steatite spindle whorl, ringed pin, and bridle bit. The only burial that can be even approximately located was found in 1926 on the North side of Drill Hall at Sandside Bay (possibly now the garage site), near a standing stone. The burial was surrounded and covered by stones and sand, laying on a paved surface, and the head on a stone. An axe, shield, knife, sickle, buckle, ringed pin, and whetstone accompanied the burial. The 1926 burial appears to have been in the turf-covered sand dunes on the edge of the golf course behind the present garage and the house to the West. The site has views of Sandside Bay, which is a good place to beach ships, and is close to the Burn of Isauld. The cemetery is in the ‘approximate location’ category.

A.J.H. Edwards, 1927, ‘Excavation of graves at Ackergill and of an earth-house at Freswick Links, Caithness, and a description of the discovery of a Viking grave at Reay, Caithness’, Proceedings of the Society of Antiquaries of Scotland 61: 202-9.

C.E. Batey, 1993, ‘The Viking and late Norse graves of Caithness and Sutherland’, in C.E. Batey, J. Jesch & C.D. Morris, The Viking Age in Caithness, Orkney and the North Atlantic Edinburgh: 152-4.