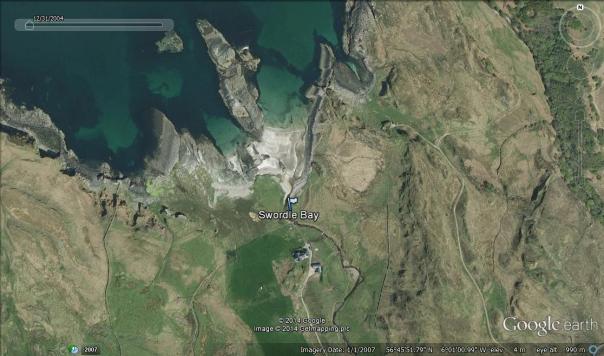 In 2011 a boat grave was discovered cut into a natural mound at Swordle Bay on the Ardnamurchan peninsula of the Scottish mainland. As well as the boat and a few human remains, the burial included the end of a drinking horn, ringed pin dated c. 850-900, sickle, axehead, late 9th century sword, shield, spearhead (deliberately broken), ladle, Norwegian whetstone, Irish glass bead, and Hebridean pottery. Isotope analysis of the two remaining teeth suggest that the person had spent their childhood north of where they were buried, with Norway as a possibility. The low mound is close to the shore and burn, but it may not have been easily visible from the water. The stones were carefully returned to their original positions after the excavation. The burial was 50m from a Neolithic chambered cairn which would have been visible and from which stones were possibly robbed to create the boat burial. A Viking Age bead was found in the cairn. Although this is (currently) an isolated burial, the Kildonan area of the Isle of Eigg from which three mound burials are known (see ‘Inner Hebrides’) is visible from Swordle Bay and this burial should probably be considered in relation to those on Eigg.