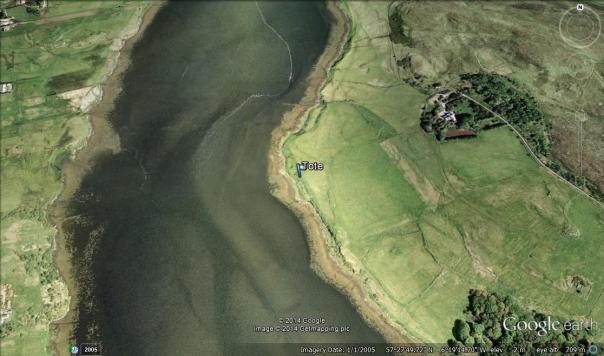 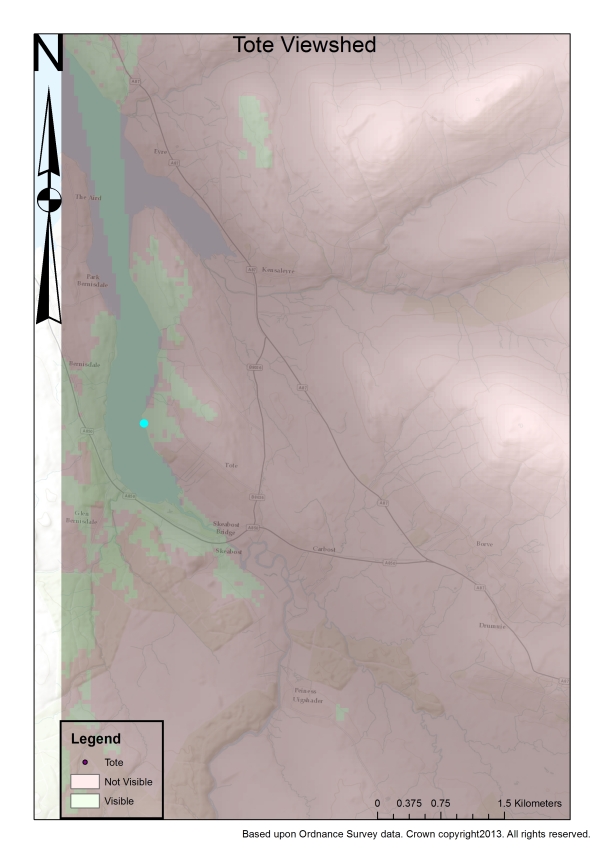 In 1922 a prehistoric cairn on a ridge overlooking Loch Snizort Beag was excavated. The ancient primary burial was at ground level and a secondary Viking Age cremation had been added near the top of the mound, containing burnt bone, axe, bronze pin, and ivory bead. The mound is very visible from the shore and loch. From the site there are good views over the loch to the opposite bank. The slope down to the burial site is quite pronounced. The viewshed map is based on the height originally recorded in 1922 – 8ft (2.4 metres) – rather than the current height of 1.2 metres. Although the mound is visible from the opposite shore (if you know what to look for) it is no longer visible from further inland as suggested by the map. 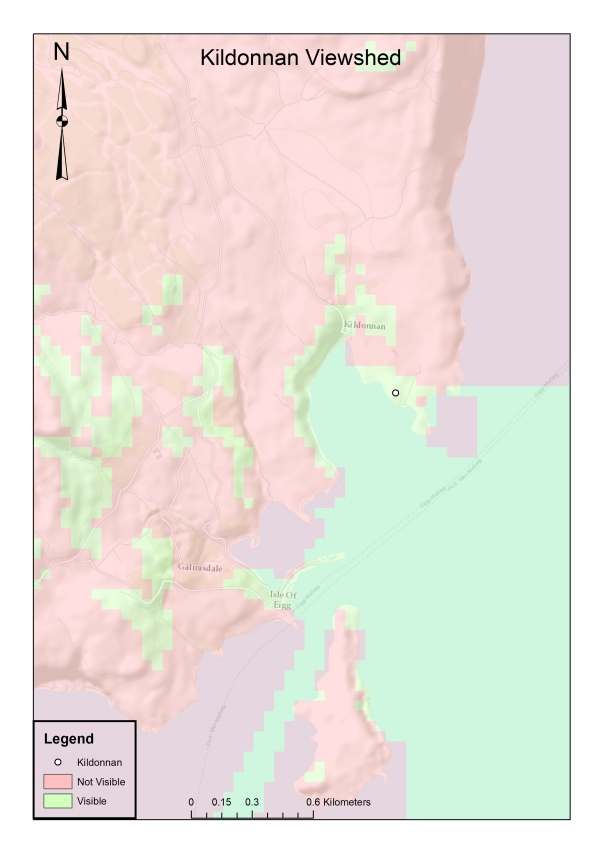 In 1875 two mounds were excavated by N MacPherson and A Joass. The excavation trenches are still clearly evident, including stones from the cist grave in the larger mound. This mound is possibly a prehistoric mound reused for the Viking Age burial, and it is approximately 12m in diameter and 1.4m high. Within metres of it is a smaller mound 5.3m in diameter and 0.6m high. Artefacts from the larger mound included a sword, spear, axe, whetstone, three beads, Carolingian-style buckle, a penannular brooch probably from Norway, and remains of wool and linen cloth. The smaller mound included a sword, perforated whetstone, two beads, Insular buckle probably made in the Irish Sea region, and a penannular brooch. 200m south of the mounds is an undated fort. A detalied map of the Kildonnan region can be found at the bottom of the page.

For a recreation of parts of a Viking funeral at the site see http://www.funeralscapes.org. 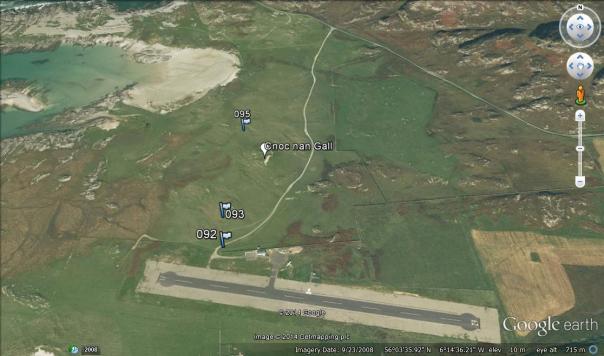 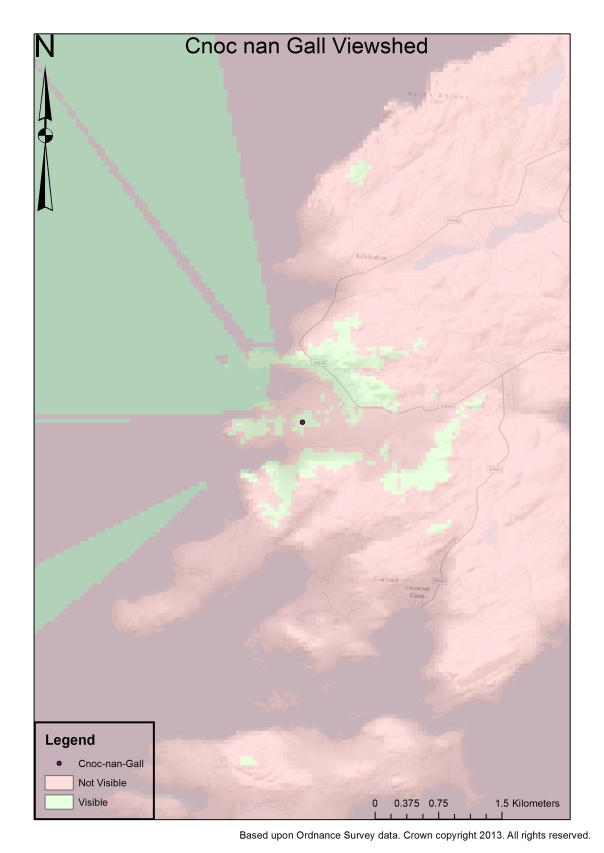 A number of burials, and stray finds not covered here, have been discovered at Colonsay Golf Course. Although known as both Cnoc-nan-Gall and Machrins Machair in the literature, the finds are close enough together to be considered a cemetery. Thus far a male accompanied by a ringed pin and Anglo-Saxon strap end under a cairn in a prominent sand dune was discovered in 2010 (white marker) and buried in the mid-late 10th century; a female buried with a small dog, re-used Celtic sheet metal, ringed pin, and a knife in a sheath was discovered in 1978 in a cist grave close to four small houses dated to the early 9th century(93); in 1891 a boat under a mound in sand dunes was discovered accompanied by a horse, sword, axe, spear, shield, ladle, amber bead, and a Pictish penannular brooch (95, or perhaps south and east of there); a second boat burial may be represented by 26 clench nails, one human (aged 13-16) and one pony tooth found in a sand dune in 1902 (92). The two older burials are in the ‘approximate location known’ category. The flat site is on Machrins Bay on the West coast of Colonsay, a good place to beach ships. Cnoc-nan-Gall means hill of the foreigners (probably the hill overlooking the bay), with Gaelic ‘gall’ (foreigners) being a common term for Scandinavians in Viking Age Ireland and Scotland. I would like to thank Colleen Batey for discussion on this site being a cemetery.

A. Becket and C.E. Batey, 2013, ‘A stranger in the dunes? Rescue excavation of a Viking Age burial at Cnoc nan Gall, Colonsay’, Proceedings of theSociety of Antiquaries of Scotland 143: 303-318. This includes a summary of other finds at the site.

M. McNeill, 1892, ‘Notice of the discovery of a Viking internment, in the Island of Colonsay’, Proceedings of theSociety of Antiquaries of Scotland 26: 61-2. 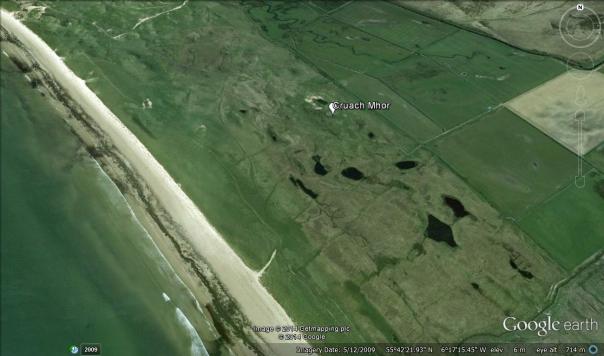 In 1958 and 1959 a number of objects including 9th C oval brooches (P37), beads, steatite spindle whorl, weaving-sword, whetstone, and a sickle were discovered in sand dunes about 300m back from Laggan Bay. These objects strongly suggest at least one Scandinavian burial in the area, whilst the discovery in the same area of pottery ranging from the Neolithic through to medieval could indicate long-term settlement. Although relatively close to the beach the burial site is not be visible (at least today) from the beach or sea due to the height of the dunes. This burial is in the ‘within 100m’ category. 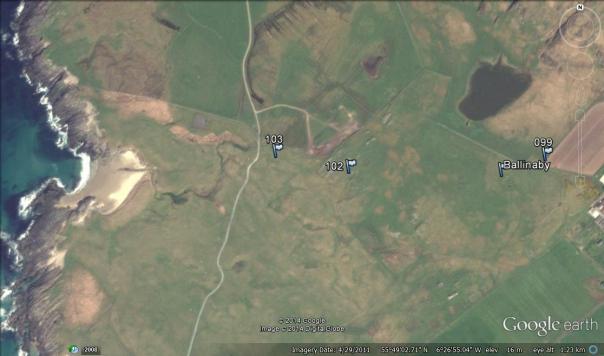 A number of finds point to a Scandinavian cemetery at Ballinaby on the north-west coast of Islay, however the position of none of the graves can be determined exactly, placing this cemetery in the ‘approximate location’ category. In or before 1788 a pair of oval brooches were found under a standing stone. There are currently two standing stones at Ballinaby (99 is the closest standing stone to the site) but there were previously three and it is possible that the act of excavation caused the third to fall over. In 1877 a likely double burial of a male and female was exposed by erosion approximately 400m West of Ballinaby (probably the farmhouse). They were buried with a late 9th/early 10th C sword in its scabbard, an Irish-sea type shield, spear/s, 2 axes, Insular drinking horn, cauldron, hammer and tongs, adze, 2 Insular; oval brooches, Irish ladle, bead necklace, silver pin and chain, glass linen smoother, tinned bronze needle case with bronze needle, 5 Irish tinned bronze mounts (Ballinaby flag). In 1932 approximately 360m West of the double burial (103, although 102 fits the landscape description better) a single burial was discovered, accompanied by a sword, shield, axe, Irish ring-headed pin, Irish gilt buckle with red enamel. The distance between the double burial and that found in 1932 show that the cemetery covered a wide area, possibly with small clusters of burials. The 1788 and 1877 burials appear to have been on high ground overlooking Saligo Bay, whilst the 1932 burial was on lower ground closer to the Bay. All of these burials belong in the ‘approximate’ category.

J. Anderson, 1880, ‘Notes on the contents of two Viking graves in Islay, discovered by William Campbell, Esq., of Ballinaby; with notes of the burial customs of the Norse Sea-Kings, as recorded in the sagas and illustrated by their grave moulds in Norway and in Scotland’, Proceedings of the Society of Antiquaries of Scotland 14: 51-89. 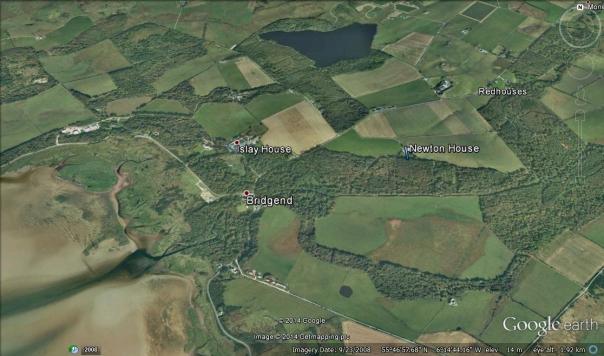 In 1845 a cist grave containing  a pair of oval brooches and an amber bead were discovered  ‘in a gravel bank on the side of the strath’ near Newton Distillery, now Newton House. There is a gentle slope from Newton House down to the River Sorn, so the gravel bank was probably between the Distillery and river in the strath, now in a plantation. This site is in the ‘approximate’ category.

J. Anderson, 1880, ‘Notes on the contents of two Viking graves in Islay, discovered by William Campbell, Esq., of Ballinaby; with notes of the burial customs of the Norse Sea-Kings, as recorded in the sagas and illustrated by their grave moulds in Norway and in Scotland’, Proceedings of the Society of Antiquaries of Scotland 14: 71. 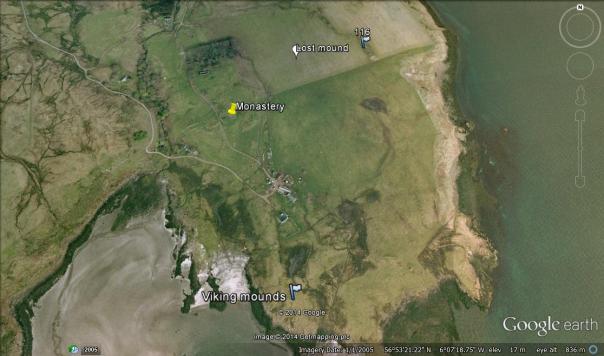 Sometime around 1830 a mound ‘halfway’ between Kildonan church and the rocks to the East (116) was levelled, in which a sword dated to no later than c. 850, a whetstone, and plates from an Insular bucket were found. Based on the sword and bucket plates this is probably amongst the earliest Scandinavian burials in the UK. The site has views over the Sound of Eigg, and of the site of the two mound burials. St Donan’s monastery (located to the left of the church in the first photo) would have been clearly visible from the burial mound. The photos above were taken from the ‘rocks’. This is in the ‘approximate’ category. 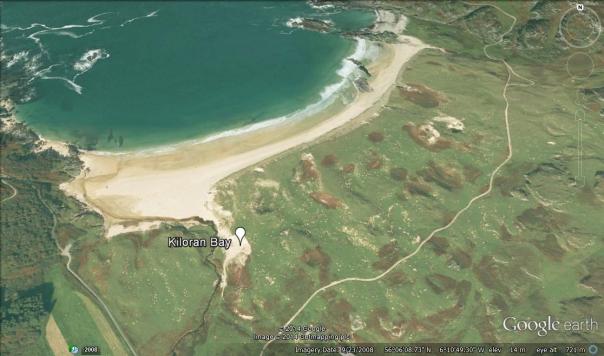 Perhaps the most spectacular Scandinavian burial in Scotland was that discovered high up in sand-dunes at Kiloran Bay, Colonsay, in 1882. Under a mound was a boat which would have been approximately 12m long, in which a stone enclosure was built. Two of these stones were marked with a Chritian-shaped cross. In the encosure was placed a male (40+) accompanied by an Irish Sea-type shield, sickle, c. 800-900 sword, axe, spear, cauldron, ring-headed pin, Norwegian silver cloak-pin, 2 arrows, 3 knives, 9 decorated mounts, Insular harness mounts, 3 perforated Northumbrian stycas (Æthelred II (841-4) and Archbishop Wigmund of York (837-54)), scales, and lead weights with Irish and Anglo-Saxon metalwork. Outside the enclosure was placed the body of a healthy 6-8 year old horse. Kiloran Bay is on the north-west coast of Colonsay. The site has excellent views across Kiloran Bay towards Mull, but the distance of the site from the (present) shore makes it unlikely that the burial was visible from the sea. However, the site is along the course of a burn which makes an easy walking route to Colonsay House 1km away, and this route may have led to a Viking Age settlement. This burial is in the ‘approximate’ category.

J. Anderson, 1907, ‘Notice of bronze brooches and personal ornaments from a ship burial of the Viking time in Oronsay, and other bronze ornaments from Colonsay. Presented to the National Museum by the Right Hon. Lord Strathcona and Mount-Royal, GCMG. With description, from notes by the late William Galloway, of a ship-burial of the Viking time at Kiloran Bay, Colonsay’, Colonsay’, Proceedings of the Society of Antiquaries of Scotland 41: 443-9. 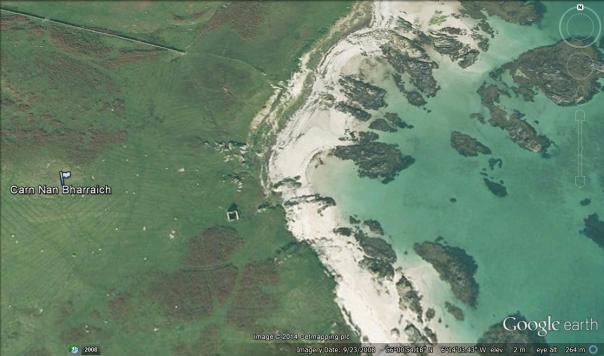 In 1891 John McNeill excavated two skeletons buried side by side associated with various stone slabs, possibly burial markers and/or the remains of a cist. Accompanying one of the burials were two brooches, probably constructed from the strap terminals of an Insular reliquary, a penannular brooch, and a ringed pin. The other burial was accompanied by just a knife and a shale finger ring. There was also charcoal containing boat rivets, and a stone sinker found nearby. This double burial of a wealthy/important and less wealthy/important person may thus have had a cremated boat as a grave-good. In 1913 another burial was excavated by J Grieve containing a pair of Berdal-style oval brooches, bone needle case, iron shears, ringed pin.  These burials may all be late 9th century, but the relationship between them is not known. Further artefacts were found in 1922 and 1924 but it is not known if they belonged to burials. The supposed site is marked out by a rectangular enclosure made of large stones measuring c. 1x2m. It is in a ‘dish’ in a large sand-dune. A 15cm layer of shells indicates that it had been a Mesolithic shell midden. The site is on the East coast of Oronsay, a small island linked to Colonsay at low tide. The site overlooks the ruined Seal Cottage and a sheltered bay with good views of Jura. This cemetery is in the ‘approximate’ category.

S. Grieve, 1914, ‘Note upon Carn nan Bharraich, or Cairn of the Men of Barra, a burial mound of the Viking time on the island of Oronsay, Argyllshire, with an outline of the political history of the Western Isles during the latter half of the ninth century’, Proceedings of the Society of Antiquaries of Scotland 48: 272-91.

M. M’Neill, 1891, ‘Notice of excavations in a burial mound of the Viking time, in Oronsay’, Proceedings of the Society of Antiquaries of Scotland 25: 432-5.