It should be noted that two dots are missing from the above map – according to The Orcadian newspaper two Viking Age burials (one with weapons) had been found on the island of Papa Westray by August 2015. The details and site location are yet to be published so they cannot be included here. Also in 2015, an unsexed adolescent was discovered buried near the beach at Crowe Point on Sanday with an iron knife. The burial dates to the 9th or 10th century. 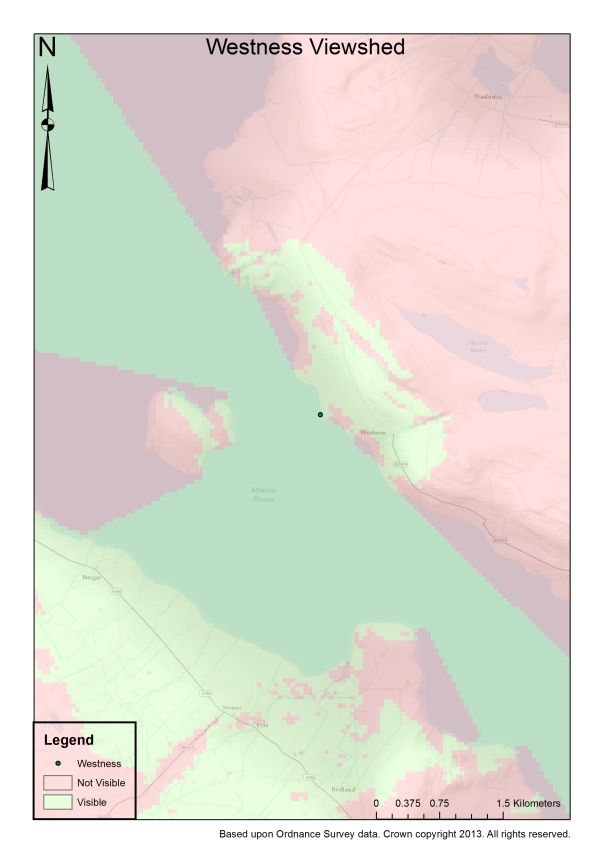 The first certain burial, of a female who died in childbirth, at the cemetery of Westness, Rousay, was discovered by accident in 1963, and the site was excavated under the direction of Sigrid Kaland between 1968-1984 revealing at least another five accompanied burials (the excavation has yet to be fully published). In 1997 another burial accompanied by a comb was discovered. It is also possible that two earlier badly recorded finds at Sweindrow belonged to the cemetery. The burials are in a Christian Pictish cemetery in use from the 7th century cemetery and they respect the earlier burials, which were marked by head-stones. The accompanied Viking Age graves consisted of two males in boat graves, two boat-shaped graves made of stones with a male and female, and a female in a rectangular grave. The form of the grave discovered in 1963 is not known. The grave-goods were too numerous to list here (see the articles listed below) but all of the males were buried with numerous weapons and domestic items, while the women were buried with brooches and combs. There were also unaccompanied Viking Age graves. The cemetery is in the Bay of Swandro and 300 metres from a Viking Age settlement and the Knowe of Swandro broch. Orkney Mainland is clearly visible from the site. The two boat-shaped graves were marked by the prow-stone of the ‘boat’ acting as a head-stone, increasing the visibility of the cemetery.

The boat burial at Scar, dated c. 875-950, was excavated in 1991. The boat had been placed in a natural mound that had built up around an earlier wall. It is not known if the wall was still visible, but if it was then there are precedents in Scandinavia for Viking Age burials being placed over earlier walls. The burial contained an aged female (60s or 70s), male (30s), and an unsexed child (about 10), accompanied by a variety of objects including the Scar whalebone plaque, combs, a sword, gaming pieces, and a quiver with arrows. The site is on a bay on the northern coast of Sanday. 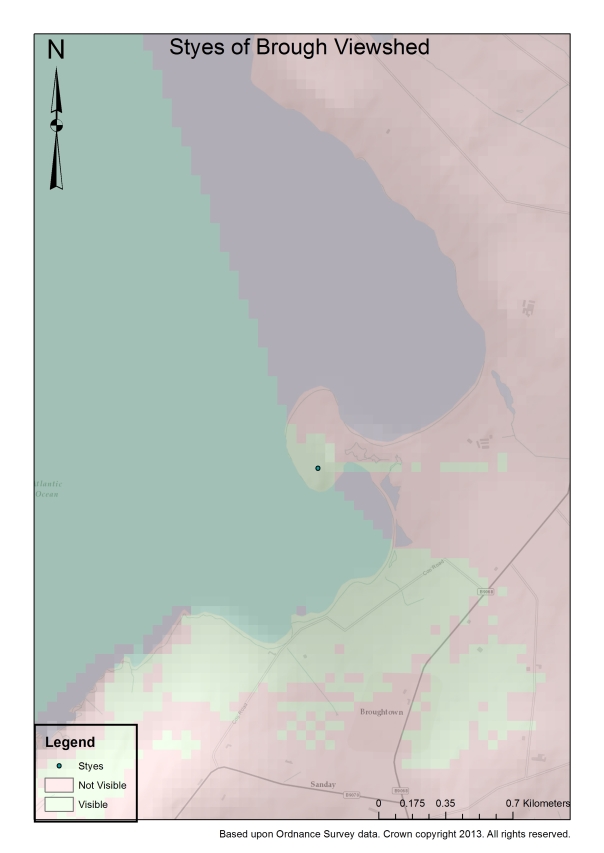 On the Styes of Brough, Sanday, there are four widely spaced prehistoric mounds, which were surveyed as part of a Time Team episode in 1997. During the 19th century a Viking Age sword was found in one of them, probably from the mound that had a boat-shaped stone setting inserted into it, and from which a fragment of human bone was found. The southern-most mound (a broch) in particular is clearly visible from a distance. The site overlooks the Bay of Brough and North Bay. The mound from which the burial probably came (Time Team’s mound 2) is the closest mound to the settlement mound behind the current farm, the likely location of a Scandinavian farmstead, and from which the prehistoric mounds are visible. Before the sea-wall was built the area may have been a tidal island. The confidence of the archaeologists in the Time Team episode suggests that this site is in the ‘within 25m’ category.

Four burials were discovered sometime between 1839-1849 near the sea-shore at the Sand of Gill, north of Pierowall on Westray. They were described as being in a north-south line (end to end?), suggesting that they were in the sand-dunes overlooking the beach and Bay of Pierowall. Taking the (present) shape of the beach into consideration, the site was possibly in the field opposite the road in the first photograph. Three appear to have been close to each other while one, without grave-goods, was some distance further north. Artefacts with the three accompanied burials included a sword, axe, and shield in one; an entire horse with a bridle-bit, part of a dog, a spear-hear or small sword, and a buckle in another; and part of a horse with bridle-bits, and a small knife in the other. Although these burials are considered as part of the larger Pierowall cemetery (below) they may form their own distinct, though related, cemetery. The Sand of Gill is an excellent place to beach a boat in the sheltered Pierowall Bay, with views of the bay and Papa Westray. Although this cemetery can be localised to the Sand of Gill, the size of that area places this in the ‘approximate location’ category. For map see next entry.

The remainder/other cemetery/ies at Pierowall, Westray, consists of at least twelve graves uncovered between 1839 and 1849. Three of these graves centred on a raised circular mound appoximately ¼ of a mile (400m) north of Pierowall village, which would place the mound inland/West from the ruined Lady Kirk. Another was about 30m from the mound. Another five graves were around another mound of sand and small stones described as being inland a considerable distance N-W of the Sand of Gill, which would place them, perhaps, another 500m or so north of the other mound burials. These estimates are necessarily based on how accurate the ¼ of a mile estimate was for the first mound, and how far a considerable distance was for the second, but it was presumably not so far as to end up near the opposite coast only 815m from the Sand of Gill. The discovery of Roman and Iron Age material amongst the Viking Age finds suggests that at least one of the mounds was an earlier man-made feature. Another three graves are known from the area, but without any clear details concerning their location/s. Grave-goods recovered from these burials are too numerous to list here but include oval and other brooches, swords, shields, knives, a spear-head, combs, sickles, ring-headed pins, beads, a drinking horn, a horse, buckles, and boat rivets suggesting that one grave (with the horse) was a boat burial. The area inland of Lady Kirk is on high ground over-looking Pierowall Bay and the Sand of Gill, as is the area N-W of the Sand of Gill, from which the Rack of Wick to the north and Grobust beach to the west are also visible. These cemeteries, or perhaps one large widely spaced cemetery, are clearly within the ‘approximate location’ category.

There are two burials recorded for Lamba Ness, Sanday. One was found in 1878 in what was described as a ruined building, with a sword, shield, and spear found but no body. The ‘ruined building’ was possibly the Broch of Lamba Ness. Indeed, objects specifically from the broch were recorded as being found in the same year by the same person, strongly suggesting that the Viking finds were at least from the same vicinity. The second burial was a cremation under a mound near the Broch of Lamba Ness, with which a pair of oval brooches, lignite arm-ring, amber bead, and ring-headed pin were found. It is not known exactly what the Broch of Lamba Ness was, but a broch or early chapel are possibilities. It is situated at the end of Lamba Ness, with views over Pool Bay and the Calf of Eday island. Pool Bay is a good natural harbour and the site of a Viking Age settlement. Please note that these burials are wrongly placed near Braeswick on the Canmore website.

1915, ‘Donations to and purchases for the Museum and Library, with exhibits’, Proceedings of the Society of Antiquaries of Scotland 49: 15.